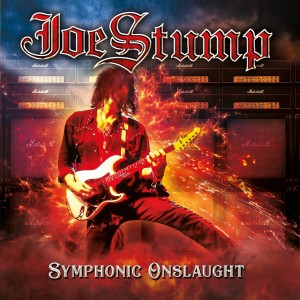 American shred guitar legend Joe Stump returns with his newest effort ‘Symphonic Onslaught“, the anticipated follow up to his critically acclaimed 2015 release ‘The Dark Lord Rises‘ via Lion Music (Finland). ‘Symphonic Onslaught‘ can only be described as one fierce slab of guitar driven metal.

Once again this is another release that will appeal to both guitar enthusiasts as well as fans of guitar driven metal. Whether it’s the Hendrix meets Blackmore old school hard rock of Stratocastle or the black metal meets thrash meets power metal viciously heavy Facemelting Devastation or the neo-classically fueled Hit The Deck, Stump continues to proudly wear his influences on his
sleeve .

He has toured the world as both a solo artist and with metal bands Joe Stump’s Reign of Terror, HolyHell and Joe Stump’s Tower Of Babel. Joe has recently been announced as the new guitarist in the relaunching of Alcatrazz alongside legendary vocalist Graham Bonnet and original keyboard player Jimmy Waldo. A new Alcatrazz studio record as well as a world tour will follow.

Joe is also an Associate Professor at the esteemed Berklee College Of Music where he’s been the metal / shred guitar specialist for the last 25 years .

‘Symphonic Onslaught‘ marks Joe’s 11th solo release and once again the Shredlord continues to raise his game in every aspect.