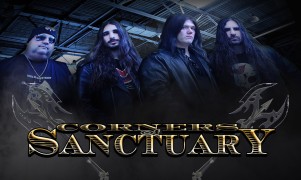 Corners Of Sanctuary (COS) has released a new music video for the second single ‘Hail, Hail,’ off their latest album ‘The Galloping Hordes,’ which is available on Killer Metal Records.

The video was shot while COS was on tour in Germany this past August supporting the new album’s CD release on August 10th . Production took place on location at the former World Fair Expo 2000 site in Hannover. The video is uniquely and vibrantly back dropped by colorful graffiti and what remains of the Fair’s now abandoned structures.

“Having been able to do a video while in Germany was such a great opportunity for us,” said COS guitarist Mick Michaels. “It commemorates our first trip there as a band and provides us a memorable and meaningful memento we can share with the fans,” he continued.

The band is now preparing for a six date run of shows in California this November. The tour, which marks COS’ second outing to the Golden State, is being presented by Metal Babe Mayhem and MBM Music LLC.

“Can’t wait to bring COS back to the West Coast,” said Metal Baby Mayhem CEO Alison “MetalBabe” Masson. “This tour is going to rock!” she added.

COS has also returned to the studio to record an new, original Holiday song, scheduled to release around Thanksgiving, as well as work on new material for a future project.

“What can we say… we like to stay busy,” said COS bassist James Pera.