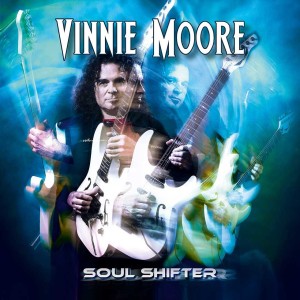 Vinnie is considered one of the originators of shred guitar, and has released eight influential solo albums, and six albums and a LIVE DVD as a member of rock royalty legends UFO. He’s made countless album guest appearances, and has even recorded the soundtrack for a PEPSI TV commercial. He’s been a member of Alice Cooper’s band and was opening act for RUSH on their Roll The Bones tour with his own band. His solo and UFO recordings as well as Live performances have amassed rave reviews all around the globe from both fans and music press, catapulting  him into guitar icon distinction! He has been an inspiration for fans and guitarists worldwide.

Say’s Vinnie, “I have been touring all over the world extensively with UFO and my solo band for the past 16 years. I started this album a couple years back and have been working on it religiously between tours. It’s quite different than any of my others. It has elements of things I’ve done in the past, but has gone much deeper into certain areas. There is an overall sort of contrast between energetic upbeat songs, versus ballad-like soulful ones which has always been a big part of my style. There are some Jam elements in places too. This is likely the most emotional and soulful thing I have ever done. Very moody, with lots of feel”. “I wrote a song as a tribute to Carlos Santana, called BROTHER CARLOS, and another called GAINESVILLE STATION which is a tip of the hat to Steve Gaines. Both players were huge influences on me when I was learning to play, and continue to be now”.

“When something moves me, what I am feeling flows directly into music. That’s how I deal with reality. I woke up one morning to the news that Chris Cornell had passed and it really hit me hard. I went into my studio, picked up a guitar and immediately wrote and recorded MYSTIFIED. Without intending to do so, and because of what was going on around me at the time, this album in a way became a tribute to people who meant something to me. The Allman Brother’s were always one of my favorite bands and I was working on a song called ‘Soul Rider‘ that was inspired by them. While writing it, unfortunately Greg Allman left us. A lot of heart went into recording that song. Also, I wrote a song called ‘Heard You Were Gone‘ for my friend and band mate Elliott (Dean Guitars) who left us unexpectedly a couple years back.”

“There are definitely some downhearted cathartic moments on this album, but they’re balanced out with songs like ‘Kung Fu Grip‘ and ‘Funk Bone Jam‘ that represent the opposite side of my personality, which is my constant joking and quirky sense of humor”.

Vinnie has done hundreds of shows all over the planet, including Europe, UK, Scandinavia, Brazil, USA, as well as India, S. Korea, Lebanon, Mexico, Russia, and Canada. The UFO “Last Orders” tour began in England in March, and will continue in the USA on October 9.

“Ancient astronaut theorists suggest that Vinnie may have been spawned from alien DNA! Or at least his left index finger anyway” – Giorgio Thessaloniki, Ancient Aliens

“Solo records are a great vehicle because the canvas is totally open and I can paint whatever and wherever I want. There’s total freedom in not having boundaries. All of my influences are on the canvas, from Rock to Blues to Be-Bop to Funk, even R&B and beyond. I have always felt music deeply even before I played guitar. After I began playing, it became my vehicle to express and release what I feel inside. I love channeling my soul into melodies and songs.”

Vinnie has released seven critically acclaimed solo albums; five albums and one DVD as a member of rock royalty legends UFO; and one album with band Red Zone Rider. His solo and UFO releases as well as LIVE performances have amassed rave reviews all around the globe from both fans and music press, inspiring guitarists worldwide and launching him into aerial guitar superhero distinction!

Says Vinnie, “I have been touring all over the world pretty nonstop for the past 12 years. I started this record about two years ago and have been working on it while at home. I’m totally jacked up about getting it out there for others to hear as well as playing these songs LIVE. Two of the songs on ‘Aerial’ were written as instrumentals but were included on a UFO record with vocals. I have also done a cover of ZZ Top’s ‘La Grange’ which I have always thought is one of the coolest songs ever. I have done ZZ covers onstage a lot.”

Vinnie has toured several times all over Europe, UK, Scandanvia, Brazil, and the USA, as well as performing in India, Korea, Mexico, Russia, and Canada. The UFO “A Conspiracy of Stars” tour will continue in Europe on October 21, and will include nine shows in December as opening act for Judas Priest on their Redeemer of Souls tour.

Says Vinnie, “With my solo records I can cover a lot more territory stylistically. I enjoy this freedom to be able to follow my muse wherever it leads. All of my influences are in there, from Rock to Blues to Be-Bop to Funk. I am into so many different styles of music that I can’t help myself, I’m basically a slave to it all and so there are inspirations from everywhere. Having said that, being a songwriter is the most important thing to me. I try to use my inspiration to create a mood and take the listener on a little journey to wherever.” 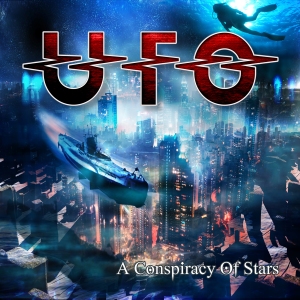 ‘A Conspiracy Of Stars’, the follow up to 2012’s hugely acclaimed ‘Seven Deadly’ album, (which charted at number 1 in the UK rock chart, 63 in the national album chart and 9 in the UK Indie chart), is an even more accomplished body of work than its mighty predecessor. ‘A Conspiracy Of Stars’, a powerful collection of eleven compelling compositions, sees UFO prove that past and present can be blended in one glorious, homogeneous whole. Arguably one of the best albums the band have ever made, ‘A Conspiracy Of Stars’ continues to expand on the more blues infused direction taken on ‘Seven Deadly’, yet also edges ever closer to the ‘classic UFO’ sound of late 1970’s albums such as ‘No Heavy Petting’ and ‘Lights Out’.

The album was recorded by the current line-up (for the first time) of original members Phil Mogg (vocals), Paul Raymond (keyboards, guitar) and Andy Parker (drums), plus lead guitarist Vinnie Moore, (who has been a permanent member of the group since 2003), and American bassist Rob De Luca, who joined the fold in 2012.

The majority of the new material was composed by virtuoso guitarist Vinnie Moore, whose expert, fluid licks and superb solos put their mighty stamp on every hook-laden, seductive, melodic hard rocking gem on ‘A Conspiracy Of Stars’. The album also features two songs written by bassist Rob De Luca, one written by Paul Raymond, and a collaboration between Raymond and De Luca.

All the lyrics were penned by front man Phil Mogg, a man of the people who once again proves his talent as a keen observer of the human species. On brooding opener ‘The Killing Kind’, a punchy, no compromise statement of intent, he opines “Tell a story about love and what lovers find, a story of possession, the killing kind.” On the smoldering song ‘Precious Cargo’, an equally subtle declaration of love, he sings “The scatter rollers coming down, summers been and turned around, it don’t seem so long ago, that you were my precious cargo”.

The lyrics and music for ‘A Conspiracy Of Stars’ were written and composed in summer 2014 at the Barn Room rehearsal studios in Kent, before UFO decamped a few miles further east to Chris Tsangarides’ Ecology Rooms studio, to record and mix the album. Coincidentally, Tsangarides was working at the studio as a 14-year-old trainee when UFO recorded their debut album ‘UFO 1’ in England in 1970.

UFO, an unstoppable act who are clearly firing fully on all cylinders, are scheduled to tour Germany, Poland, The Czech Republic, Lithuania and Switzerland in February and March, prior to an extensive 17 date UK and Irish tour in April and May 2015. Dates are:-

Red Zone Rider have released an album trailer video ahead of the September 16th release of their debut self titled album on Magna Carta Records.

The band consists of