Overtures are another band I somehow have missed along the way such is the multitude of material and bands these days. Artifacts I discover is in fact the band’s third album release, following on after 2010’s Rebirth and 2013’s Entering the Maze.

The band hail from Italy, and are firmly ensconced in the progressive metal arena with a song construct which will be familiar to fans of the genre.

From the opening bars of ‘Repentance‘ the maturity of the band is obvious, both from the musicianship through to the production. Title track ‘Artifacts‘ is enjoyable apart from the death metal like vocal interlude half way through, but together with the following track ‘Gold‘ it probably rates as one of my favourites on the album. Pounding drums, wailing guitars and a bass line fit to wobble your drink off the table, it’s everything that progressive metal should be.

To sum up, certainly an album worth checking out and I shall be checking out their previous two releases into the bargain!

‘Artifacts‘ will be released on May 27th by established Greek label Sleaszy Rider Records.
In the next weeks the band around powerful singer Michele Guaitoli will announce all the details about the promo tour and an official videoclip, too.

The album has been mastered once again at GateStudios Hamburg (Avantasia, Edguy, Kamelot, Rhapsody Of Fire) by Olaf Reitmeier in Wolfsburg, Germany.
The artwork was made by the German artist Franziskus Pfleghart.

Italian prog/power metallers Overtures have announced that their new album ‘Artifacts’, will be released on May 27th by the Greek label Sleaszy Rider Records.

After the huge success of the previous ‘Entering the Maze‘, supported by two European tours with Threshold in 2014 and with Almah and Secret Sphere in 2013, the band reaches now its fourth chapter with an even more mature and personal sound.

The cover artwork was done by the award winning German artist Franziskus Pfleghart. The mastering process has been once again made at Sasha & Miro Paeth’s (Avantasia, Edguy, Kamelot, Epica) Gate Studios, in particular by Olaf Reitmeier. 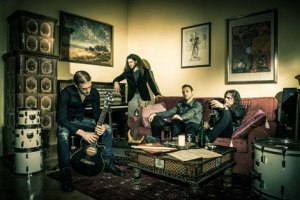