UK pomp rockers CATS IN SPACE have released a new music video for ‘Thunder In The Night‘, the track is taken from their 3rd album ‘Daytrip To Narnia‘, which will be released on March 1st via Harmony Factory/Cargo Records.

CATS IN SPACE invite you to join them on a ‘Daytrip To Narnia’. An album crammed with even more outrageousness than all their predecessors combined. Jam packed with incredible artwork and extras it is very special.

A huge ‘Epic Long Player’ featuring on one side, soon to be Power pop classics like the single ‘Hologram Man’ & ‘Silver & Gold’ through to the acoustic power ballad ‘Chasing Diamonds’ with vocals reaching out to the stars. Flip it over and you see the conceptual 27 minute masterpiece that is ‘The story of Johnny Rocket’. Six songs making up a ‘Space travelling masterpiece’ turning from rock to disco to heart wrenching balladry in one flight…A bold huge musical move that only these Cats can pull off in this day and age of musical blandness. It is a ‘vinyl journey’ that will leave you breathless……So strap yourselves in as we take you out of this world…..

The album will be available on standard CD, 12″ 180g White Vinyl and an extremely Limited Edition Narnia Box which is a numbered, premium quality wooden boxes full of Cats In Space goodies including the new album on CD, a 12″ of ‘Thunder In The Night‘ which includes unreleased tracks like their version of Led Zeppelin’s ‘Communication Breakdown‘, ‘Man In The Moon‘ (acoustic), ‘Mr Heartache‘ (Manzi Mix), a Johnny Rocket woven patch, dog tag, guitar plectrum, six collector cards and a cover of Slade’s ‘How Do You Feel‘ featuring Danny Bowes from Thunder on 7″ vinyl.

To support the album, the Cats will undertake a UK tour in March, April and May, with support from Rock Goddess on selected dates with the other support bands to be confirmed in due course.

We’re pleased to announce that Space Elevator are coming to Leos, The Red Lion as part of their ‘We Can Fly Tour 2018‘.

After their critically praised self titled first album was released the band embarked on a successful tour with fellow Brits Cats In Space, and will soon be releasing their follow up album. 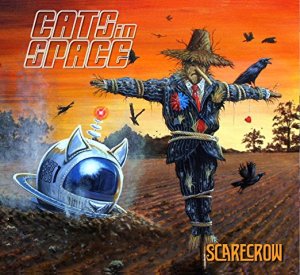 Cats In Space will be releasing ‘Scarecrow‘, the follow up album to their debut ‘Too Many Gods‘, on August 25th. The album is now available to pre-order as CD, Vinyl (180gm), Cassette & Digital download.

Cats in Space are over the moon to be supporting Thunder on their UK tour in March 2017. It’s a natural match, as Thunder vocalist Danny Bowes sang on their version of the classic Slade song ‘How Does It Feel’.

“I was hooked the first time I heard the Cats in Space album”, says Danny, “I thought they were both mental and brave to make such an overtly 70s influenced album, and I loved it”.

The band take the heady power pop rock sounds of the Seventies and make them sound fresh and new.

Cats in Space are currently in the studio, working on the follow-up to their successful debut ‘Too Many Gods’, with a provisional 2017 release date for the new album. Meanwhile, tracks like ‘Mr Heartache’ and ‘Only In Vegas’  are still gaining play on radio stations, reviews and praise: a testimony to the quality of the material and the talent of the band.

Cats in Space’s Greg Hart comments “The opportunity to tour with Thunder is a dream ticket for us. We’re going to rock you all the Moon and black. It will be purrrrfect!”

Some might say that it’s a bit of a risk doing a full tour of music that’s apparently ‘out of fashion’. Well judging by the performances of both bands on the night, how wrong said people would be. The engines were ignited and the ‘Out Of This World Tour’ took off…

Space Elevator started off proceedings, which was the first chance I’d got to see them live since the release of their self titled album last year. Having been blown away by the vocal talents of ‘The Duchess‘ on said album I was blown away once again by her live performance. 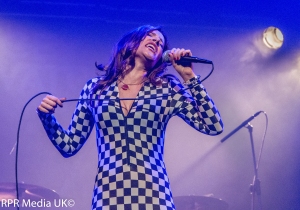 Wow what a voice! The girl can sing, putting household ‘stars’ to shame. We mustn’t overlook the talents of the rest of the band, the understated less is more playing of guitarist David Young, and the solid backbone of Chas Maguire (bass) and Brian Greene (drums). Space Elevator delivered a consummate performance, their experience and professionalism shining through.

Picking stand out tracks for me is a tad difficult as I thoroughly enjoyed every song. However if pinned to the wall I’d have to mention ‘I Will Find You (Gallifrey Dreams)‘ with The Duchess dedicating it to her favorite Dr. Who, Sylvester McCoy. Okay not everyone’s first choice but I’m not one to judge. Also the band’s cover of Thin Lizzy’s ‘Don’t Believe A Word‘, which they had released as a charity single, which had their own slant on it without removing the essence of the original.

The band currently have a Pledge campaign to fund follow up album which I really hope they manage. One things for certain, the next chance I get to go see them, I’ll be there in a flash!

And so onto Cats In Space. I was fortunate enough to have caught them at The Half Moon, and was looking forward to seeing them again, this time on a bigger stage.

They are another band absolutely brimming with talent & experience who have gained momentum at a rapid rate since the release of their debut album. It’s a clever trick to take the heady sounds of the Seventies and make them sound so fresh. Good music is good music. This is another performance where it is difficult to pin down individual tracks, well apart from one that is, that being ‘The Greatest Story Never Told‘, an absolute monster of a track and my favorite off the album hands down. Bassist Jeff Brown started the track off, not showing the nerves from the Half Moon Gig, before vocalist Paul Manzi took up the mantle with the band handing us the sort of performance this track deserves. 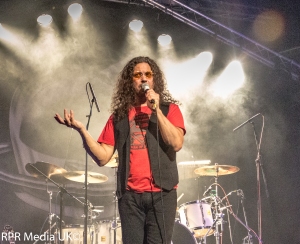 With guitarist’s Greg Hart and Dean Howard swapping licks throughout, the powerhouse that is Steevi Bacon on the drums, backed up by Jeff Brown on bass and the ivories deftly tinkled by Andy Stewart, and fronted by the aforementioned Paul Manzi, entertained we certainly were. 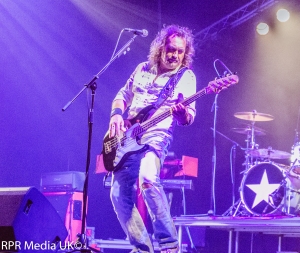 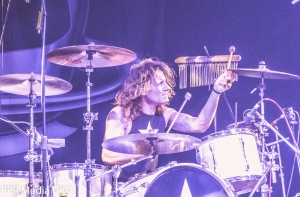 With the band already working on a follow up to ‘Too Many Gods‘, the future’s certainly looking bright.

To sum up, a highly entertaining night was had by all, theatre shows are tricky due to them being all seated although a few people did venture down in front of the stage when Cats In Space were playing. Still it would of been nice to have seen more down the front for both bands. All in all a highly successful tour for both bands and thoroughly deserved too.

The Cats Are Back!  Taken from their critically acclaimed debut album ‘Too Many Gods’, the new single ‘Only In Vegas’ is a light hearted ‘ELO tinged’ pop rock romp through the crazy world that is Las Vegas.

Once again written by the song writing partnership of Cat guitarist Greg Hart & 10cc’s Mick Wilson, and focusing on massive lush harmony vocals, multi layered walls of guitars and accompanied by some delicious acoustics, this hook laden song even features the wonderment of the keyboard Vocoder. With a fun, no expense spent video to accompany the song, it is pop rock at its best and once again confirming there’s no other band out there quite like Cats In Space.

Greg Hart says “Initially the track was a light acoustic ‘romp’ that Mick Wilson and I agreed could possibly fill a gap as a ‘bonus’ song, maybe perhaps as an album track.  However, as in many cases in the studio, a song sometimes grows on its own and becomes something much more. Dean Howard laid down some amazing ‘Joe Walsh style’ guitar, which kinda lit the blue touch paper, and the ‘Cats wall of sound’ was once again implemented!  Adding ELO vocoders, a Glenn Campbell style guitar solo played on a ‘Baritone guitar’, and a wall of 40 harmony guitars, tons of vocals and lead vocal ad- libs by Mick Wilson, it turned the song into another huge production.

At the end everyone was insisting this ‘had to be a single’. Who was I to argue? After all, it hit all the 70s iconic themes that I loved as a kid. It does in my opinion benchmark the fact that us Cats like to have fun sunny songs as well as the ‘Gothic sinister epics’ in the ‘Cat repertoire’.

We all need happy tunes in our lives, and this for us is the ideal song to play on a Summers day with the roof down as you blast along the motorways pretending it’s 1976, but respecting the national speed limits at all times of course..!”

Tapping into a simpler, youthful, happier time, when music was meant to be like this. ‘Cats in Space’ are now here for the duration, with the Spaceship firmly docked on Earth. Love or hate the name, it aint going away anytime soon.

Yes, the ‘Cats crept in’, but they aint creeping out again!

And also, Cat fans….look out for something VERY special being released to tie in with the bands ‘Out of this World’ tour this September…. A ‘rock duet’ on a timeless 70s classic that will ‘put your windows in’, but more on that later… You can see the Cats In Space play live at The O2 London at Stone Free Festival Sunday 19th June. 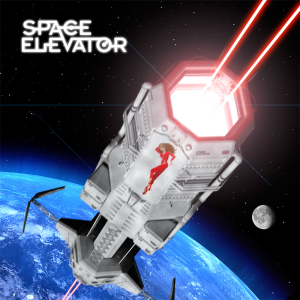 UK rockers Space Elevator, fronted by the mysterious singer ‘The Duchess‘ release their new self-titled album on CD and Vinyl, due out on May 13, 2016 via SE Productions/Cargo Records.

All download profits to www.actiononaddiction.org.uk (Patron HRH The Duchess of Cambridge)

The album features brand new songs in a re‑incarnation and updated version of the Classic Rock era. Singles released, including the love song to Dr Who and a number of live performances, have helped establish British rock band Space Elevator on the UK rock scene. The band is keen for music lovers to experience the album in the way it was written as a complete set of songs and not just a collection of individual singles. Lead guitarist David Young says “it is very flattering to have our songs, likened to the music of Queen, Kate Bush, Genesis and Fleetwood Mac”.

Live gigs are where the mysterious The Duchess comes into her own and displays her amazing vocal range. With brilliantly crafted songs featuring screaming guitar solos and theatrical vocals over a powerhouse rhythm section, Space Elevator are the new band to catch live this year!

September ‘Out of this World Tour‘ joint headline with Cats in Space: