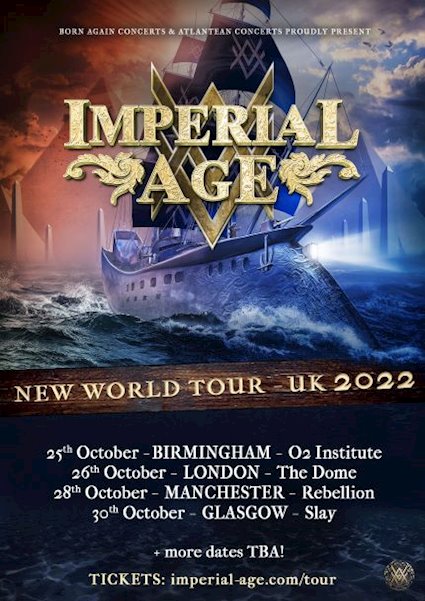 Despite 4 postponements, pandemic and war, the international symphonic metal juggernaut that is Imperial Age are finally sailing to British shores once again!

Initially formed in Moscow, Russia by Alexander Osipov and Jane Odintsova, Imperial Age was one of the first Russian bands to publicly stand up against the war and government on 24th February 2022, subsequently leaving the country and embracing an international line-up of European musicians.

Having released their newest album, ‘New World‘ to great international acclaim followed by an EU tour of 19 shows in Germany, France, Netherlands, Belgium, Spain, Portugal, Italy and Switzerland in September 2022, the band is now on holiday in the Netherlands – getting ready for the UK leg of the ‘New World Tour‘ that finally kicks off in October 2022.

All tickets bought since 2020 are valid.

New tickets are available at: https://imperial-age.com/tour

Imperial Age:
An epic, massive yet also beautiful fusion of Heavy Metal and bombastic Wagnerian classical music with catchy melodies that just instantly stick in your head, chugging riffs that will send you into a headbanging frenzy and a combination of male, female, rock, operatic, choral and folky vocals will leave you breathless and in awe of the talent on display in this insanely excellent musical landscape of colossal proportions.

The spellbinding music of Imperial Age has an amazing ability to touch, move and ignite the soul with a deep variety of feelings, where each track sends you into individual emotional experiences of wonder and excitement.

Imperial Age is the sort of band that is primed for the big stage, standing out in excellence with their grandiose and empowering wall of sound, soaring beautiful vocals, excellent musicianship and stunning visuals, playing upbeat tunes that will send a stadium crowd dancing in ecstasy.
In a relatively short amount of time, the band gained the interest of genre founder Christofer Johnsson, engaged in extensive international touring and received multiple record deal offers from top labels – but decided to cultivate their relationship with their audience, staying independent and 100% fan-funded, selling thousands of records, getting millions of streams and views and receiving 6 figures in crowdfunding and donations from their vast global army of loyal and ultra-supportive fans.

The Imperial Age online concerts of 2020 (during the first lockdown) and 2021 (with a symphonic orchestra and choir) were some of the first of their kind and accumulated more than 100,000 live viewers on all 7 continents (including Antarctica).

Originally founded by singers Alexander “Aor” Osipov and Jane Odintsova in Moscow in 2012, Imperial Age was one of the first Russian bands to publicly protest against the invasion of Ukraine in February 2022 and to gather financial aid for Ukrainian civilians. This led to the founders emigrating to Antalya, Turkey, where the band is currently based.

Those who like their Metal to be massive, over-the-top and catchy yet also melodic, gentle and pristine: it’s time to crank the volume up on your speakers – as you will find Imperial Age your new favourite band!