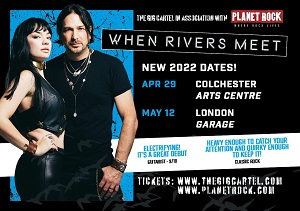 British Blues Rock husband and wife duo, Aaron and Grace Bond of When Rivers Meet, are pleased to announce two headline concerts in April and May 2022. The concerts will take place at their hometown venue of Colchester Arts Centre on Friday April 29th, followed by their first headline concert in London at The Garage on Thursday May 12th.

Tickets go on sale at 10am on Thursday July 15th via www.thegigcartel.com and www.planetrocketickets.co.uk.

Earlier this year, When Rivers Meet made history when they became the first band to win four UK Blues Awards including “Best Blues Album Of The Year”, “Blues Band Of The Year”, “Emerging Blues Artist Of The Year”, and “Most Inspirational Online Performance Of The Year”.

When Rivers Meet first caught the public eye when they released their debut album, ‘We Fly Free‘ in November 2020. Since then, their weekly Saturday night livestream concerts, rave reviews in the music press, and radio airplay on Planet Rock, BBC Radio 2, Radio Caroline, plus many more radio stations and shows, have seen them develop into one of the most sought-after Blues rock bands in the UK.

Earlier this year, they were invited to perform a live stream performance of their single ‘Did I Break The Law‘ on Joe Bonamassa’s Keeping the Blues Alive Stream-A-Thon which where proceeds were raised to aid blues musicians affected by the pandemic.

Prior to that, When Rivers Meet were also added as special guests on King King’s October 2021 UK tour.

“We’re totally blown away to have won all these awards,” says When Rivers Meet’s lead singer, mandolin and fiddle player, Grace Bond. “We started playing music together over ten years ago. When we started out, we didn’t really know what direction we were going in until two years ago when we realised that Blues Rock was not only the music we listen to the most, but it’s also the music we love the most.”

“When lockdown started, we didn’t know what we were going to do,” reflects Aaron. “Like everyone else our live shows were cancelled, and we were unsure when music would start up again. We noticed other people jumping online so we thought, let’s give it a go. We started doing live stream performances through our iPhone, but looking back, we can honestly say it was the best thing we could have done.”

When Rivers Meet have finished recording their sophomore album; released in November 2021.