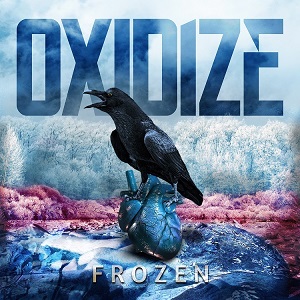 Early this year, OXIDIZE have released their critically acclaimed debut album ‘Dark Confessions‘ via Wormholedeath, that gathered unanimous positive response from both critics and audience.

Get a copy of ‘Dark Confessions‘ following the links below :

“In the spring of 2017 Oxidize was started. The goal was to find the people that wanted to work tgether, had the same taste of music, were friends and not totally unfamiliar with the music industry. It’s not easy to find them when you start to search in your head (network). But after a good nights sleep, the day after I (Per) quitted Arctic Void, I contacted Anton Darusso, the lead singer in the band Wings of Destiny/Darusso. I found Anton through Power Prog’s webpage. He was on the same record company that Arctic Void was signed to. I mailed him two demo songs and Anton Agreed to do them. So the singer was on board and now it was time to get in touch with the rest of the people that I thought about;

I called Niclas Karlsson, (lead guitar)(Crystal Eyes, Zonata, Fierce Conviction) I needed a guy who could bend strings and had an awesome technique. He have also a stage presence that’s good for live performances. He jumped on board and we started to work on the material. Drummer, Mika Vainio, (Mrs. Hippie, Hardcore superstar, Brassmonkey, etc.) a guy I learned to know a few years back through a photo sessions with Brassmonkey. Skilled drummer with a lot of qualities. He visited me in the studio and he also agreed to join up with Oxidize, so now was the band complete. 🙂”