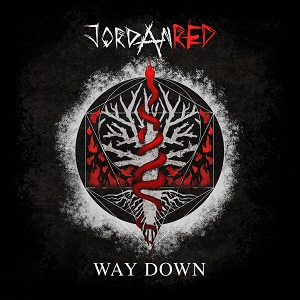 The single is mixed and mastered by Romesh Dodangoda (Bring Me The Horizon, Bullet For My Valentine, Don Broco) and the artwork is by renowned digital artist, Elisa Schillaci (Alter Bridge, A Perfect Circle).

‘Way Down’ is an anthem dedicated to self-acceptance and living life with purpose. Schillaci’s artwork is a reflection of these lyrical themes; no tree can grow to heaven unless its roots reach down to hell.

“This song is a wakeup call to live with purpose and cut out the toxic people, patterns and behaviours that drag you down. Ultimately, it’s about accepting the good, the bad and the ugly that exists in all of us and the journey we take to become whole.”

This new single is the fourth from their upcoming album, ‘Hands That Built The World‘. Since the release of their first single, ‘Beautiful Monsters’, in February 2020, Jordan Red have accumulated 70,000 Spotify streams and 185,000 YouTube views. The two subsequent singles, ‘Don’t Let The Heavens Fall‘ and ‘Hands That Built The World‘, have gained coverage on Planet Rock, Loudwire, The Noise, RAMzine and TotalRock.

‘Way Down’ was recorded at Long Wave Studios in Cardiff and features frontman Dan Leigh and guitarist Dan Baker, as well as Conor O’Keefe and Dave Fee of As Lions (Eleven Seven Music). Jordan Red set up base in London, and developed a powerful, anthemic sound with an emphasis on big riffs and even bigger choruses.

Their debut album, ‘Hands That Built The World’, is due for release in early 2021. For more information, visit http://www.jordan-red.com