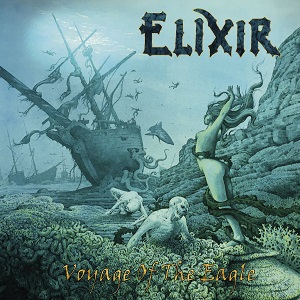 Elixir guitarist, Phil Denton, explains: “Mark was on our wanted list in the summer of 2019, but unfortunately was away on holiday the weekend that we held auditions. From the batch of bass players that we did audition that weekend, we were very impressed with Luke Fabian’s energy and style, and he was subsequently chosen to record the new album with a view to joining permanently.

However, with the album recorded, we felt that Mark deserved a chance to show what he could do, and after a very good rehearsal session, we had to make a difficult choice. Luke did a fantastic job recording the album, and his energy and style shone through on those recordings. However, when it came to playing the old material, we felt that Luke was imposing his own style on the songs just a little too much. Whilst this isn’t particularly a bad thing, we found that Mark had a sound closer to (original bass player and founding member) Kevin Dobb’s, and played the songs closer to their original versions.

On reflection, we felt that our fans would appreciate hearing the old stage favourites in as close a form to the original recordings that they know and love as possible. It was always our intention to continue Kev’s legacy in the best way that we possibly could, and feel that Mark is the man to help us do that.

Therefore, we took the decision to go with Mark for all future live shows and recordings.
We thank Luke for his great contribution on ‘Voyage Of The Eagle’ and wish him all the best for the future, and welcome Mark to Elixir.”

Elixir released their new studio album ‘Voyage Of The Eagle’ on March 6, 2020 on Dissonance Productions.