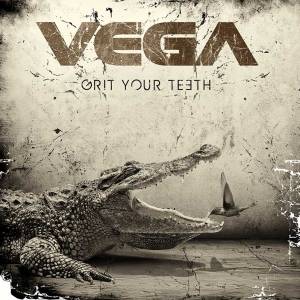 VEGA are and have been one of the best AOR/Melodic Rock bands in the UK for a number of years now, releasing some excellent albums and renowned for their high energy live shows, the hard work ethic and memorable shows have garnered them a growing fan base both at home and across the Globe. And with their 6th studio album ‘Grit Your Teeth‘ that will I’m sure be expanded as it’s a great album.

This time around there are 11 tracks on offer and the album kicks off with an absolute cracker with ‘Blind‘, it certainly blast things off in style, no messing around here, and this one has VEGA written all over it. It’s punchy, the chorus is just beaming. It’s not a full on in your face album from beginning to end, but it’s certainly powerful. For me VEGA are a band at the top of their powers, that’s not to say that their output won’t continue to get better and they won’t continue to develop in different directions, but they are creating music of a consistently high standard, this release has a heavier kick to it for sure, always love Marcus Thurston’s guitar work, and they’re certainly a leading light of the UK Melodic Rock scene.

The one track that I just can’t get out of my head is ‘Save Me From Myself‘, it’s just stunning. There’s something a bit different about it, I love the opening keyboard section. It’s not the first time I’ve heard lyrics of a similar nature, but this time the song and the arrangement just grab me from the off and it makes perfect sense to me. As with everywhere else on this album, Nick’s vocals are exemplary. The keyboard riff seems simple, but there’s something about it that I can’t get out of my head, love this song.

The first single off the album ‘(I Don’t Need) Perfection‘ is another cracking rocker, another example of what’s so good here, it sounds different, some of the rockier tracks have a similar tempo but a very different sound. This album is certainly a band effort and there aren’t weak spots for me. An accusation levelled at a number of melodic releases from Frontiers over the years was a very similar sound resulting from the production, but that’s certainly not something that can be levelled here, this is polished, but not overly so, the sound is great, the instruments all come through clearly in the mix and aren’t overshadowed, great work from all involved.

There are catchy riffs all over the place, ‘This One’s For You‘ being a prime example, but we also get stuff like ‘Battles Ain’t A War‘ which is very different, but works so well and is almost an anti ballad, it’s one of the tracks that grew on me the more I listened to the album.

This really is a superb piece of work from the guys, a mature and interesting album, not all one flavour, toned down in places which changes the whole perspective and well written and structured songs that are not just fleeting moments in the mind. For me this is definitely one of my favourite albums of 2020 so far, can’t wait to hear some of these songs in a live set soon, I know the band are gutted to not be out on the road with this one straight away, but when they do get out there it will be well worth the wait. Do yourself a favour and get out and pick this one up, it doesn’t disappoint.