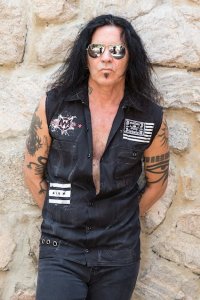 It established LOVE/HATE as genuine Hollywood rock superstars, and they developed a strong cult following. Their second record ‘Wasted In America‘ followed in 1992, and the band hit the road with the likes of Skid Row, Dio, AC/DC and Ozzy Osbourne!

Since then Jizzy has played, recorded and toured with platinum artists like Ratt and L.A. Guns, including a stint with Guns N’ Roses drummer Steven Adler in Adler’s Appetite, whilst currently fronting the legendary Quiet Riot. Jizzy has also released several critically acclaimed solo albums, the most recent being 2018’s ‘All You Need Is Soul’ on Frontiers Records.

The legacy continues in 2020 with Jizzy Pearl’s LOVE/HATE who this year have been touring the 30th anniversary of ‘Blackout In The Red Room‘ playing the iconic album in full.

Jizzy and his band are sounding better than ever and Golden Robot Records (part of the Golden Robot Global Entertainment Group) are extremely honoured to be the new home of a Hollywood Rock icon like Jizzy Pearl. Jizzy’s global fanbase can look forward to some scintillating new music in 2020.