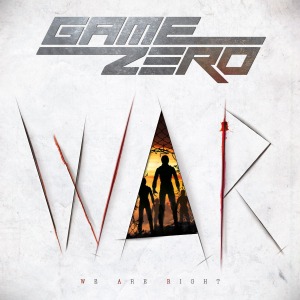 GAME ZERO‘s new album, ‘W.A.R. – We Are Right‘, is out now via ART GATES RECORDS. The album can be ordered here: https://smarturl.it/gz-war-we-are-right

‘W.A.R. – We Are Right‘ has been recorded at The Form Studio 2.0/Studio Compresso mixed by Antonio Aronne, mastered at Elephant Mastering by Riccardo Parenti.

The cover artwork has been designed by Fabio Timpanaro (Deathstars, Ancient, The Foreshadowing); visual concept by Alessandro ‘Alexincubus’ Pallotta.

GAME ZERO is a modern metal band formed back in 2013 who combine classic and modern metal elements creating songs with powerful riffs and evocative melodies. Introspective and intimate lyrics with a huge, unique sound create a well distinctive band’s trade mark. Founded by AlexIncubus (former Theatres des Vampires) and Mark Wright, the band recorded and published its first album “Rise” in 2015 with the label Agoge Records.

The first single ‘The city with no ends‘ was selected and included in the soundtrack of the animated feature ‘East end’, released in 2017 in Italian cinemas and screened at major European film festivals such Cannes Film Festival. ‘The city with no ends’ music video got several awards overseas, ranking in the top spots of the film festival in Miami and Los Angeles (USA).

Between 2016 and 2017 GAME ZERO did their first European tour sharing the stage with bands like Sabaton and Equilibrium. On July 2018 GAME ZERO played at Faine Misto Festival, with many artists like the Queen of Metal Tarja Turunen, The Rasmus, Oomph, Betraying the Martyris, Amaranthe, Dope, Vader, Infected Rain and many more. On March 2019 GAME ZERO played as main support for Amorphis plus some shows in Latvia.