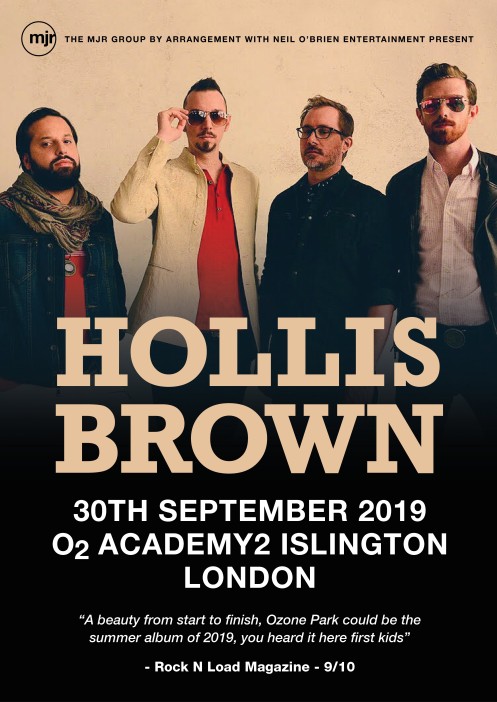 Following the release of their new album ‘Ozone Park’, New York quartet Hollis Brown will be returning to the UK to play a special London show at the O2 Islington Academy 2 on Monday 30th September.

The quartet was born out of a garage in the Ozone Park neighborhood of Queens on a steady diet of psychedelia and basement jams in Greenwich Village. The band have toured the world, playing rock clubs, stadiums and everything in-between.  Adam Duritz himself asked the band to join the Counting Crows on an extensive 3 month US tour which saw them play the stunning Red Rocks Amphitheater. They have also played with Citizen Cope, Jackie Greene, Jesse Malin, Toots & The Maytals and The Zombies.

Talking about coming back to the UK, singer/guitarist Mike Montalli says; “London is one of my favorite cities in the world! We can’t wait to get back there with the band and rip it up with a new album and show!”

A lyrically self-reflective record, Montali explains; “the last record was a social conscience story telling record, but on this one, I felt like it was more based on relationships, people to people.” The songs weave together in a cohesive, dynamically exciting ride that ranges from the soulful buoyancy of ‘Blood From a Stone‘ and ‘Stubborn Man‘ to the ringing Americana guitars of the Jesse Malin cover ‘She Don’t Love Me Now,’ the funky flavour of ‘Go For It‘ and the fuzzy hard rock of ‘Bad Mistakes.’

Their journey has seen them pick up the attention of David Crosby, Nils Lofgren (E Street Band) and even had a brief encounter with the actor Eric Roberts in California. You would have heard their music in films such as “Bad Country,” starring Willem Dafoe and Matt Dillon and on TV series’ “Shameless,” “Kingdom” and MTV’s “Real World.” Also their music has been featured in the worldwide trailer for “The Founder” starring Michael Keaton.