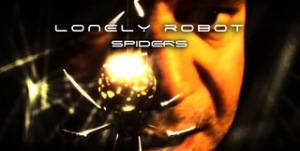 Lonely Robot, the project masterminded by producer, guitarist and singer/songwriter
John Mitchell (Kino, Frost*, Arena, It Bites), are set to release their fourth album ‘Feelings Are Good‘ on the 17th July 2020. Now, a second track from this record has been released featuring an impressive video by Miles Skarin of Crystal Spotlight:

John Mitchell has the following to say about this song: “‘Spiders‘ is a song about a woman, nay wolf in sheep’s clothing, who chose a path of greed and wretchedness and exploited her position of trust at a time of weakness when she COULD have done the exact opposite. Long since gone but never forgotten for all the wrong reasons.”

‘Feelings Are Good‘ marks sort of a fresh start following the conclusion of the ‘The Astronaut Trilogy‘ as John explains: “‘Feelings Are Good‘ is a bit of a departure from the first three Lonely Robot albums. On ‘Feelings Are Good‘, I wanted to explore more personal themes and the songs are very much about individual experiences and narratives that I believe had been the cornerstones, good and bad, to my life. The long tall and short of it is that we’re back on planet Earth, and I have a personal lyrical axe to grind!”

‘Feelings Are Good‘ is now available for pre-order and will be released as a Limited Edition CD Digipak, Gatefold 2LP+CD and as Digital Album in both 16 & 24 bit versions (all including 2 bonus tracks). Pre-order the album from a variety of partners here: https://lonelyrobot.lnk.to/Feelingsaregood

Lonely Robot will hit the road in December 2020 for some select headline dates, and you can find a list of those below:

John Mitchell is a man with a rich musical heritage and history – from musician and vocalist, to songwriter and producer. With bands like Arena, Frost*, Kino, It Bites and Lonely Robot, to name but a few, Mitchell has left his mark on the current progressive rock scene and has been involved in dozens of recordings. He is also a respected producer & mixer, running Outhouse Studios in the UK and working with artists as diverse as You Me At Six, Enter Shikari, Alter Bridge, Asia, Don Broco, Funeral For A Friend, McFly & much more.